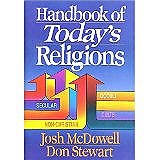 "Handbook of Today's Religions" is written by Josh McDowell, and Don Stewart. Hundreds of religious sects, denominations and cults profess to teach the True Way, yet their various versions of the True Way differ widely, some even seem to be almost Christian. This book is a reference work written for all concerned Christians who desire to have a more discerning, broader-based knowledge of the major cults and belief systems that diabolically oppose Bible-based Christianity. Compiled from four major besting-selling works by authors Josh McDowell and Don Stewart, 'Handbook of Today's Religions' offers comprehensive, concise information that exposes the various cults and "isms" so prevalent in the world today. The information presented in this volume will help immensely to broaden your knowledge, give you discernment and guide you in further study.

This product has not yet been reviewed.

Please login or register to write a review for this product.